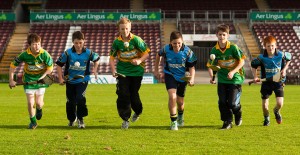 I was lucky enough to get the chance to take part in the  Aer Lingus International Hurling Festival in Galway from 19th to 21st June. The event was organised by Aer Lingus and Etihad and brought together teams from around the world. We stayed in the Galway Bay Hotel, all expenses paid. We were very well looked after. A parade through the city and a speech by the GAA Chairman really drove home the significance of the event.

I played with the Europe team, made up exclusively of non-Irish players, including a lot of beginners and who’d never trained together before the competition. We played against two American teams and one from Argentina and suffered three large defeats. But the experience was full of positives: playing 15-a-side and getting the technical expertise of the Galway coaches helped me improve my game. It was my ever first hurling competition, I played at wing back.

The Saturday was when the finals would take place at Pearse Stadium. There was also a number of Under 12 teams there. Seeing all the kids playing captured the essence of it all for me: just playing the game and enjoying each other’s company. There’s no doubt in my mind, hurling is the best of the gaelic sports. To all my Tolosa Gaels teammates, don’t forget that the club’s intention is to promote all gaelic sports.

The Sunday was also a fantastic experience, as I attended the All Ireland Football Final at Croke Park with Eddie Kelly (Club treasurer). Thanks again for this great gift!